9to5: The Story of a Movement

They couldn’t kill their bosses, so they did the next best thing—they organized.

When Dolly Parton sang “9 to 5,” she was doing more than just shining a light on the fate of American working women. Parton was singing the true story of a movement that started with 9to5, a group of Boston secretaries in the early 1970s. Their goals were simple—better pay, more advancement opportunities, and an end to sexual harassment—but their unconventional approach attracted the press and shamed their bosses into change. Featuring interviews with 9to5’s founders, as well as actor and activist Jane Fonda, 9to5: The Story of a Movement is the previously untold story of the fight that inspired a hit and changed the American workplace.

This list of classic labor films is drawn from recommendations by experienced labor film festival organizers; if you have suggestions for additions, please submit them in the comments section below or email them to us at streetheat@dclabor.org

Posted by Labor Film Database on October 8, 2019 in A: Highly Recommended Labor Films

Following his documentary I AM NOT YOUR NEGRO, Raoul Peck takes on the story of the formative friendship of Karl Marx (August Diehl) and Friedrich Engels (Stefan Konarske). From Germany to France to England, the young thinkers pursue justice for the working class, who toiled under obscenely exploitative conditions to enrich their employers (including Engels’ father, a mill owner) during the peak of the Industrial Revolution. Peck crafts an accessible biopic about these two larger-than-life thinkers, taking them down from their historicized pedestals and allowing viewers to relate to them as young strivers disrupting an inequitable status quo through the power of persuasion and organization. Official selection, 2017 Berlin International Film Festival. DIR/SCR/PROD Raoul Peck; SCR Pascal Bonitzer; PROD Nicolas Blanc, Rémi Grellety, Robert Guédiguian. Germany/France/Belgium, 2017, color, 118 min. In German, English and French with English subtitles. NOT RATED
Run Time: 118 Minutes
Genre: Historical drama

Synopsis: THE UPRISING OF ’34 tells the story of the General Strike of 1934, a massive but little-known strike by hundreds of thousands of Southern cotton mill workers during the Great Depression. The mill workers’ defiant stance – and the remarkable grassroots organizing that led up to it – challenged a system of mill owner control that had shaped life in cotton mill communities for decades.

Synopsis (IMDB): Paul Robeson narrates a mix of dramatizations and archival footage about the bill of rights being under attack during the 1930s by union busting corporations, their spies and contractors. In dramatizations, we see a farmer beaten for speaking up at a meeting, a union man murdered in a boarding house, two sharecroppers near Fort Smith Arkansas shot by men deputized by the local sheriff, a spy stealing the names of union members, and a dead Chicago union man eulogized. In archival footage we witness police and goons beating lawfully assembled union organizers, and we see men at work and union families at play. The narration celebrates patriotism and democracy.

Synopsis (IMDB): Born in Birmingham, Duff Anderson, the father of a male toddler, who lives with a nanny, re-locates to a small town to work on the railroad. He meets with and is attracted to Josie much to the chagrin of her preacher father. The marriage does take place nevertheless, both re-locate to live in their own house and he gets a job in a mill. He decides not to bring his son to live with them. Challenges arise when the Mill Foreman finds out that Duff is attempting to unionize the workers, forcing Duff to quit, and look for work elsewhere. Unable to reconcile himself to working on a daily wage of $2.50 picking cotton nor even as a waiter, he gets a job at a garage. He is enraged at a customer for belittling him and Josie, and is let go. Unemployed, unable to support his wife and son, he gets abusive and leaves – perhaps never to return.

Synopsis (IMDB): John and Mary sims are city-dwellers hit hard by the financial fist of The Depression. Driven by bravery (and sheer desperation) they flee to the country and, with the help of other workers, set up a farming community – a socialist mini-society based upon the teachings of Edward Gallafent. The newborn community suffers many hardships – drought, vicious raccoons and the long arm of the law – but ultimately pull together to reach a bread-based Utopia.

Synopsis (IMDB): During World War I, a poor black Southerner travels north to Chicago to get work in the city’s slaughterhouses, where he becomes embroiled in the organized labor movement. He becomes prominent as a leader of fellow African-Americans in the union, though many, including his best friend, view him as a sell-out.

Synopsis: Wrongly convicted James Allen serves in the intolerable conditions of a southern chain gang, which later comes back to haunt him. 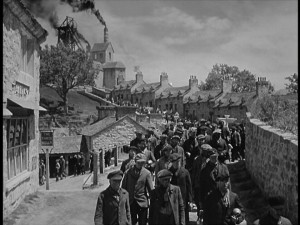 Synopsis: Huw Morgan, an old man who has decided to leave his Welch valley forever, tells his story. Huw is the youngest in a family of 6 brothers and 1 sister and the film centers on his struggle toward manhood amid conflicting demands of faith, economics, education and family loyalty. Set in a Welsh mining community at the beginning of the 20th century, based on the novel by Richard Llewellyn. Welsh choral music and quaint patterns of speech are nice period details.