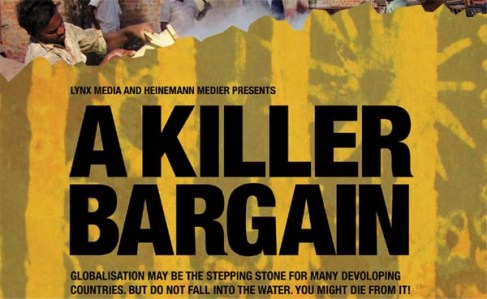 A Killer Bargain refers to the availability of cheap consumer goods, imported by Western companies, whose prices don’t reflect the human and environmental costs of their production. Consumers remain unaware of the conditions under which the goods they buy are produced. This film makes those connections shockingly clear. Would you buy that batik tablecloth if you knew the children making it were working with cancer-causing solutions everyday?

12 Feb
Director: Petra Holzer & Ethem Ozguven | Producer: Petra Holzer & Ethem Ozguven
Genre: Documentary | Produced In: 2007 | Story Teller’s Country: Turkey
Synopsis: Since the year of 1989, multinational mining companies have been coming to Turkey in order to mine gold using the cyanide leaching process. Eurogold, an Australian and Canadian joint venture, is one of them. Their mine is situated in Bergama. The people living in Bergama and the 17 surrounding villages started to resist the project. The people won all the instances of their legal struggle. However, the mine still operates. The story of “Alethea” is about the people and their long struggle. We followed their struggle since 1996.