Murder Not Accident documents the collective struggle against the “work-related serial murders” in Turkey. In 2018, at least 1,872 people died on the job due to preventable causes while working. The annual death toll of occupational diseases is estimated to be at least six times this figure. None of these deaths are registered as work-related and most of the victims of work-related violence remain unnamed. This is a state of emergency – corporate crime and social murder, which remain deliberately ignored by the government and state entities.

In 2008, a group of families mourning for loved ones, victims of work-related murders, came together. They translated their shared grief into a demand for justice. They named their network Workers’ Families Seeking Justice (WFSJ) and gave the victims a name with this struggle:

We are the families of the workers who lost their lives in preventable work-related accidents and occupational diseases, the root reasons of which are duplicated in each new death. That is why we call them “work-related murders”. Those who are responsible for them –highest-ranking executives and officials of corporations and public bodies– were never exposed to a just judicial process and continue to enjoy full impunity. We are mourning together and our claim for justice is to “remember the dead and fight for the living”.

The Support Group, a solidarity network of urban planners, architects, lawyers, and other activists from Bir Umut Derneği (One Hope Association), based in Istanbul, share a common cause with the Workers’ Families. Since May 2012, on the first Sunday of each month, the Families and the Support Group have been holding “the Vigil for Conscience and Justice” on Galatasaray Square in the center of Istanbul. The vigils were held there 74 times and were banned on the 75th occasion. The reasons given for the ban were the precise ones for which the families have fought for so long: “national security, public order, the protection of public health”.

Yet Workers’ Families Seeking Justice hold on to their demand. Concurrently, since 2012, the Support Group has published seven almanacs about the murders, tracing the national press coverage and some local, non-published sources as well as highlighting the families’ demand for memory and justice.

“System Error” seeks answers to the great contradictions of our time and makes it clear why, despite everything, everything continues as before. The film shows the world from the perspective of people fascinated by the possibilities of capitalism. Whether European financial strategists, American hedge fund managers or Brazilian meat producers: They cannot, must not or do not even want to imagine a world without an expanding economy.

A humorous personal and essay film addressing architecture, habitation, space, density, xenophobia, gentrification and urban development. A power struggle between mountain peasants who have been raising milk cows on common land and a village bailiff trying to gain power driving them off the land.

A look at the puzzle of “time poverty,” which equates to the more people try to save time, the less they seem to have of it.

Miners struggle to survive after an explosion leaves them trapped two miles underground.

‘Mine 9’ Review: A Tense Disaster Drama, Undermined by Clichés

Film about the construction industry blacklist in the UK.

SOLIDARITY is about the secretive methods used against UK activists and trade unionists. Blacklisted construction workers and activists spied on by the police share their ongoing struggles.

Blacklisting in the UK construction industry impacted thousands of workers who were labelled ‘troublemakers’ for speaking out and secretively denied employment. Activists uncovered alarming links between workplace blacklisting and undercover policing.  SOLIDARITY attentively follows meetings between activists and law students, brought together for the film, revealing the determination of a community working together to find a route to justice.

Made in Bangladesh is a 2019 Bangladeshi drama film directed by Rubaiyat Hossain. It was screened in the Contemporary World Cinema section at the 2019 Toronto International Film Festival.

Notes by Steve Cook, President, Washington Baltimore News Guild; cookstevend@gmail.com
Tells the story of a garment worker who decides to organize her coworkers into a union after a fire kills her best friend. The young woman, Shimu, has to overcome skepticism from her coworkers, resistance from her husband, double-crossing from a coworker, pressure from her bosses, bureaucratic inertia from the government, and a host of obstacles like we all face.
I want everyone in my shop and other open shops to see this movie. It really lays out what we all face in organizing, but the stakes are clear as day in a way that it often is difficult to communicate to our units. It would be great if it were available in DVDs, so locals could show it, or people could share it in their homes, or pass it around.
The film also highlights the universal struggles unions face anywhere in the world. The things I described above are things we face in our own organizing efforts. I also took away a message of solidarity with working people regardless of their nationality, geographic location, gender, or ethnicity. Their struggle is our struggle. These are messages that people must hear again and again. Cameron Bailey, the TIFF artistic director called Shimu, “the Norma Rae we need now.”
This movie has distribution in France starting Dec. 5 though an outfit called Pyramide International, which TIFF lists as the international sale agent. As far as I know, no one has picked it up in North America. I think it would be ideal for the DC Labor Filmfest, but also would be great if it could get exposure in North America in the meantime. If you have connections in the distribution industry, perhaps you could spread awareness of the movie among them.
The contact information for Pyramide in the TIFF book are sales@pyramidefilms.com, and 0033142960220.
I also am including some links that give you a fuller idea of what Made in Bangladesh is about. I hope I’ve given enough description of how important I think this movie is. Please feel free to contact me for a fuller description or for any way that I may be able to help.
Steve Cook, President, Washington Baltimore News Guild; cookstevend@gmail.com

Sorry We Missed You

Ricky and his family have been fighting an uphill struggle against debt since the 2008 financial crash. An opportunity to wrestle back some independence appears with a shiny new van and the chance to run a franchise as a self-employed delivery driver. It’s hard work, and his wife’s job as a carer is no easier. The family unit is strong but when both are pulled in different directions everything comes to breaking point.

Labor Wars of the Northwest

Three decades of labor strife in the Pacific Northwest at the turn of the 20th century. 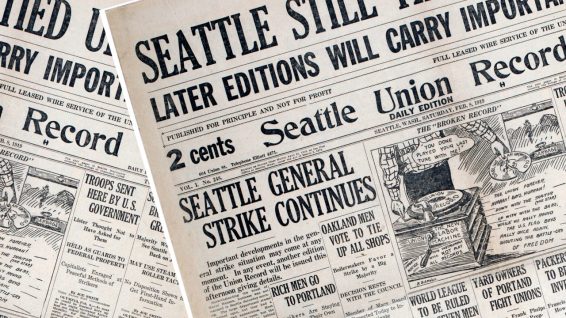 This one-hour documentary reveals the plight of working class men and women who battled for better wages, reasonable hours, and workplace safety.

Our Time Has Come: The Story of the 9 to 5 Movement

In production
Directed by Julia Reichert

Documents the rise of the movement for recognition and fair wages/benefits for women clerical and service workers.

Private Joe Bauers, the definition of “average American”, is selected by the Pentagon to be the guinea pig for a top-secret hibernation program. Forgotten, he awakes five centuries in the future. He discovers a society so incredibly dumbed down that he’s easily the most intelligent person alive.