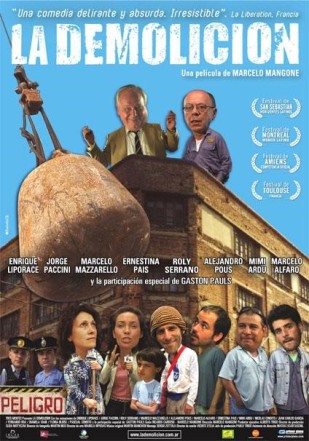 Based on a theatrical piece, it tells the story of a man tenacious about defending his company while, at the same time, another man shows up with the mission to destroy it. Osvaldo Lazzari undergoes precarious working conditions at a company that deals with the demolition of abandoned buildings. His boss has put him in charge of supervising the pulling down of an old textile factory where a big supermarket is meant to be built.
During the previous routine inspection, Lazzari finds an unexpected occupant in the building: Alberto Luna, a former employee obsessed with making the factory work again, who thinks that Lazzari has come to the company in order to reactivate production. And, as if that weren’t bad enough, police agents, promotional staff, the press staff and his own wife will turn poor Lazzari‘s situation even more difficult.