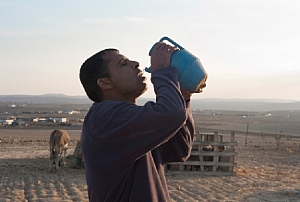 Dir: Ami Livne
Israel / 2012
84 minutes
Hebrew, Arabic (Subtitles: English)
Kamel lives with his brother and sister-in law at the edge of the Negev desert on land that has been in their Bedouin family since the Ottoman Empire. But since they have no paperwork to prove their ownership, their claim is disputed by the Israeli government. State officials eventually hand down an order for demolition of the family’s few small shacks. These strains take the toll on the family, exacerbating existing tensions. Kamel serves as a security guard at a central bus station. Khaled resents his brother’s willingness to work for the very government that is causing their problems, despite his reliance on Kamel’s income. When the brothers try to appeal the demolition order, even the Bedouin Authority office advises them to accept compensation and abandon their land. The situation seems hopeless, until Kamel comes up with a plan.

The International Labor Film Festival in Israel runs May 1-7 at the Haifa Cinematheque.
Eliyahu Zigdon ellie.zigdon@gmail.com