Labour in a Single Shot

Starting in 2011 artist, curator, and author Antje Ehmann and filmmaker, video artist and author Harun Farocki initiated video production workshops in 15 cities around the world in which participants were to engage with the subject of ‘labour’: paid and unpaid, material and immaterial, traditional or new. The videos could not be longer than two minutes and they had to be taken in a single shot. The camera could be static, panning or travelling but cuts were not allowed. This concept references the Brother Lumière’s famous film Workers Leaving the Factory which was filmed in one continuous take from a fixed camera position.

The result of these workshops, which were organised together with local branches of the Goethe-Institut, are 400 films which show people engaged in all kinds of work, each film taking a different stance, literally and figuratively, towards its subject while also recording the diverse mental attitudes and bodily relation people have to their work.

Facing the challenge of filming something that might be essentially repetitive, continuous and boring, the films also foreground the work of the camera operator and his or her aesthetic decisions. In the multitude and diversity the films form a visual compendium and an archive of labour and cinema in the 21st century that is never boring or repetitive but enhances and simultaneously questions our perception and understanding of work.

All the films can be watched on a dedicated website, at random, or sorted by city, colour or type of work. A selection of 90 films was shown as an installation at the House of World Culture in Berlin from 27 February to 6 April 2015 with an accompanying conference. This exhibition also presented the project ‘Workers Leaving the Factory in 15 Cities’ (2011 – 2014), consisting of contemporary remakes of the famous film by the Lumière Brothers which were shot in 15 cities all over the world. Also included in the exhibition was the installation ‘Workers Leaving the Factory in Eleven Decades’ (2006), which showed scenes of workers leaving the factory throughout the history of cinema, from the Lumière Brothers (1895) to Lars van Trier’s Dancer in the Dark (2000).

‘Labour in a Single Shot’ is a co-production of the Harun Farocki Filmproduktion with the Goethe-Institut.

Newsreel, 6 minutes
A wave of strikes occurred in 1946 after World War II ended and wartime wage-price controls began to erode. Here we see clips on labor disputes at Western Electric, Western Union, the auto industry, railroads, coal, ships, and trucking. The strike wave set the stage for passage of the Taft-Hartley Act of 1947, which included injunctions for national emergency disputes.

Second Shift: From Crisis to Collaboration

When GM prepared to pull out of Lansing, a team of government, business, labor and other community leaders convinced the auto giant to invest over a billion dollars instead. This documentary tells the story of successful regional collaboration to create the “second shift” for a community in crisis.

The WASH NY Campaign. the story of the recently successful campaign by RWDSU to bring dignity and fairness to exploited “Carwasheros” around NYC. Special recognition to Charles Fostrom and Janna Pea of the RWDSU and Chio Valerio of New York Communities for Change.

Directed by: Charles Fostrom and Janna Pea of the RWDSU and Chio Valerio of New York Communities for Change

Anthony has driven a school bus in Staten Island, New York for twenty-four years. His plans to retire suddenly grind to a halt when the Union (ATU 1181) goes on strike in response to a contract dispute with the City of New York. The film follows Anthony and his fellow drivers to the picket line, where they find themselves battling harsh winter weather, a media blackout, Union politics and a Mayor who refuses to negotiate.

Twin Cities Assembly Plant: A Job and a Family

Since 1925, Ford Motor Company has operated a manufacturing plant on the banks of the Mississippi River in Saint Paul’s Highland Park neighborhood, employing thousands of workers. This documentary tells the history of the Twin Cities Assembly Plant, United Auto Workers Local 879 and the unique community both hourly and salaried workers created inside and outside the factory. 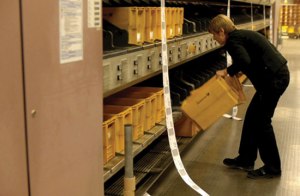 A butcher, a post office worker, a taxi driver, a nurse and a deejay are accompanied during their night in Hamburg. Documentary filmmaker and cameraman Timo Grosspietsch observes with his camera in such a way that involves the audience immediately. It is a quiet film that leaves room for the people portrayed and depicts their workplace in carefully composed images. It documents the tough daily life of those whose jobs nobody really wants to do anymore.

A short film series from all over the country by one of the labor movement’s pre-eminent current day
documentary filmmakers – Mary Matthews. Director Matthews, for the TWU International takes us right into the center of worker/labor battles being fought all over the country right now. These shorts will include:
TWU: FRONT LINES OF HURRICANE SANDY
TWU Local 100 and TWU Local 234 join forces in support of Hurricane Sandy relief efforts.
PRECIOUS CARGO: SCHOOL BUS DRIVERS ORGANIZE
School bus drivers and monitors join TWU in Burelson and Weatherford, Texas.
SUPPORT YOUR DEALERS
The casino dealers of TWU Local 721 In Las Vegas, NV secure contracts at Wynn Resorts and Caesars Palace.
TWU GET OUT THE VOTE
Philadelphia’s TWU Local 234  and New York City’s TWU Local 100 work together to help get out the vote in Pennsylvania.
NASA FIREFIGHTERS PROTEST HUGE CUTS & LOSSES
TWU Local 525 members fight 20% in salary cuts and retirement benefits for firefighters, paramedics and inspectors who work at the Kennedy Space Center.
THE AMERICAN WORKPLACE
This is the American Workplace, where you will spend most of your life. Hard work in America comes with an important promise.
I SUPPORT AMERICAN JOBS: DFW PROTEST
American Airlines employees unite in protest at Dallas/Ft. Worth airport over tens of thousands of proposed job cuts at the airline. AA mechanics, flight attendants, fleet service, community business people and local leaders speak out on how and why you can show your support.
THE AMERICAN WORKFORCE
Hard working TWU members keep American Airlines and American Eagle operations going every day – rain or shine. In spite of AMR’s bankruptcy, TWU members continue to perform as airline professionals, doing their best for our passengers every day, 24-7.
YOUNG WORKERS OF TWU
Young Workers in the TWU are trained the right way from the start.

Posted by andrew765 on January 21, 2014 in Cities-Urban, Documentary, Politics, Transportation