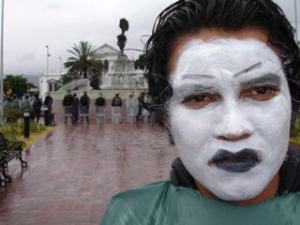 Based on personal testimonies FROZEN HAPPINESS recounts the struggle of a mother and her children to gain the freedom of their husband and father. Falsely charged with the assassination of New York-based Indy-reporter Brad Will, APPO (Popular Assembly of the Peoples of Oaxaca) supporter and community activist Juan Manuel Martinez endured sixteen months of unjust imprisonment. With the support and solidarity of participants in the 2006 popular uprising and members of APPO the struggle of the family turned into a broader campaign demanding the freedom of Juan Manuel and an end to impunity. Set against the first democratic change of government in eighty years the video bears witness to the power of solidarity and independent mobilization.

Synopsis (IMDB): A team of journalists investigate how human trafficking and child labor in the Ivory Coast fuels the worldwide chocolate industry. The crew interview both proponents and opponents of these alleged practices, and use hidden camera techniques to delve into the gritty world of cocoa plantations.

Traces of the Trade

Synopsis: fascinating film made by a descendant of the largest slave trader in U.S. history

Posted by iwwggrandson on June 13, 2012 in Documentary, Slavery

Posted by iwwggrandson on June 13, 2012 in Blacks, Drama, Slavery

Synopsis (IMDB): A Dutch slave captain, on a voyage to Cuba, faces a revolt fomented by a newly captured African slave, Tamango. The slaves capture the captain’s mistress, forcing a showdown.

Synopsis (IMDB): Palmares is a 17th-century quilombo, a settlement of escaped slaves in northeast Brazil. In 1650, plantation slaves revolt and head for the mountains where they find others led by the aged seer, Acotirene. She anoints one who becomes Ganga Zumba, a legendary king. For years, his warriors hold off Portuguese raiders; then he agrees to leave the mountains in exchange for reservation land and peace. It’s a mistake. Zumbi, a warrior whose mother was killed by Portuguese and who spent 15 years with the Whites, stays in the mountains to lead Palmares. In 1694, the Portuguese import a ruthless captain from São Paulo to lead an assault on the free Blacks. Can Zumbi keep Palmares free?