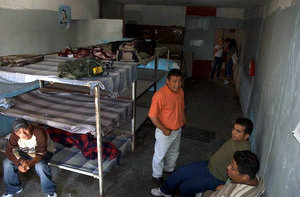 SYNOPSIS
Documentary about illegal immigration shot primarily in Alabama, Arizona, and northern Mexico. The premise is that Arizona is the new Alabama, the epicenter of an intense struggle for migrant justice. The documentary’s purpose is to bring basic immigration issues into focus. Those issues include the impact of free trade agreements on migration, the lack of a legal way for poor Latin Americans to come to the United States, the inherent abuses of the guest worker program, the fact that many migrants are indigenous people, anti-immigrant politics, the reality of thousands of migrant deaths at the border, and an escalating ideology of the border.
The Second Cooler raises the question “Who benefits?” from illegal migration. It has interviews with 25 illegal migrants, including three children under the age of 12. It follows several of them throughout the film. In addition, it includes interviews with 55 professionals including historians, lawyers, clergy, labor union organizers, politicians, a Border Patrol agent, human rights advocates and others who untangle the threads of a complicated issue. When a viewer reaches the end of The Second Cooler, he or she will understand why 12 million migrants are in the United States illegally and will be able to offer an informed answer to the question, “Who benefits?”

Posted by Labor Film Database on December 4, 2012 in Documentary, Immigrants/Immigration